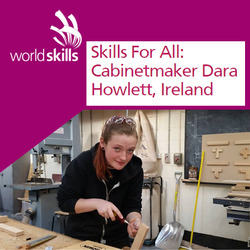 The HeForShe campaign pushes for greater gender equality in vocational education and skills professions. Dara tells how she loves working with wood and being a girl in a traditionally male profession doesn't change anything in her mind.

Read her article below. When Dara Howlett took part in a WorldSkills Competition last year, she realised that what she really wanted to do was work with wood. The cabinetmaker from Ireland selected her skill because of the sense of accomplishment she gets from transforming ideas into reality, and her determination to follow a design path that deviates from existing perceptions. “I chose the cabinetmaking skill because I like woodwork and have never been the sort of person who decides not to do something just because it isn’t considered the norm,” she explained. “It really didn’t cross my mind that I shouldn’t try it just because I’m a girl.

And it was like nothing I’d ever done before. It gave me a sense of where I would like to see myself, and has made me push myself to a point I never thought I’d reach.” The allure of cabinetmaking for Dara is its outlet for expression. “So many people do things they don’t particularly like to make a living,” she said. “I’m lucky to be doing something I love.” “Participating in skills competitions in any way is a great achievement, but being able to say I was the first female in the cabinetmaking category has brought great benefits for me. I hope it will be the first stepping-stone in my career.”

As her choice of skill proves, Dara is not someone to be bothered by barriers. “If you believe you can’t do something, you won’t do it,” she says. “With a positive vibe, anything can be achieved." “Breaking the ideology that comes with ‘gender-specific’ roles will always be a challenge.” “The mind-set that often leads to ‘different’ not being accepted does make things harder for women to be seen as equals in fields generally classed as being for men.“ “But this should encourage women to break that cycle, and show that nothing will stop us achieving our goals.” WorldSkills is recognizing skilled women around the globe in celebration of International Women’s Day, 8 March.

Join us in supporting HeForShe – a solidarity movement for gender equality, led by the United Nations. Take the HeForShe pledge,by signing at HeForShe.org, and acknowledge that you are “one of billions… who believe that everyone is born free and equal”, and that you “will take action against gender bias, discrimination and violence to bring the benefits of equality to us all.